To Villian or Not To Villian...

...That is the question! It's not a question of having a villian. Every story needs a villian of some sort, be it another person, mother nature, or maybe the protagonist's own mind. Even a book about overcoming an adversity such as a debilitating disease has a villian - the disease!
The question today is, should a novel include scenes in the villian's point of view. Specifically, I'm referring to romantic suspense. Some editors prefer manuscripts with only the hero and heroine's point of views. But what about you, as a reader? Do scenes written in the villian's point of view add to the suspense? Or do they give away too many clues?
In the evolution of She's Mine, I included some scenes in the villian's point of view. Adam, the villian, is a creepy guy. He has a warped view of the world and his place in it. I infused his scenes with all the twisted menace a villian deserves. Adam has set his sights on Caitlin, the heroine, and he's determined to have her no matter what it takes. Here's a sample:

Adam sat at the edge of the woods, watching. Caitlin thought she was clever, moving earlier than planned. Foolish woman. It didn’t matter when she came back to Naultag, because he’d known all along that she would.
It irritated him to be stuck here in hiding while she struggled to carry her luggage into the house. He’d do that for her, and so much more. Soon she’d understand his love and she’d come to love him, too.
He’d failed to convince her that they were meant to be together. If they hadn’t been interrupted he’d have had her. Now she hated the man he’d been that night. She was afraid.
He could use her fear.
He smiled and turned his back, strolling down the woodland path to his parked car. Play his cards right and it shouldn’t take long to make her see that he was her true love.
“You’re mine, Caitlin.” 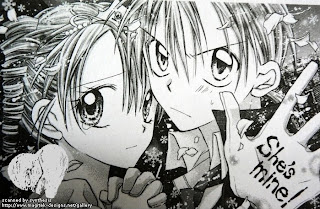 Let me know your opinion. Do you like romantic suspense novels to include scenes in the villian's point of view? Do these scenes give away too much or muddy the waters more (making it harder to figure out who the bad guy is)?

Leave a comment including your email address - use (at) and (dot) for security reasons - and you'll be eligible to win a Dunkin Donuts gift card (or Starbucks, whichever the winner prefers). On April 15th, I'll draw a name at random from all the comments.
Posted by Tammy Doherty at 3:54 PM