Betrayal everywhere! Can Lucinda trust Hank in her DARKEST HOUR?

This week I'm thrilled to be showcasing DARKEST HOUR the latest novel from my critique partner and partner-in-crime, Nike Chillemi. We met many years ago through ACFW, quickly discovering we share a warped sense of humor. She calls me "Blondie" and I call her "Red" (when I'm not calling her "fearless leader"!).

Nike's first three novels in the award-winning Sanctuary Point series have been well received. Readers look forward to strong female protagonists and truly heroic male protagonists. As she frequently says, Nike likes her villains to be bad. All of her characters come alive in each story, feeling as real as the people you meet out on the street. Below is a short interview with Nike. Come back Wednesday for a sneak-peek excerpt of DARKEST HOUR. 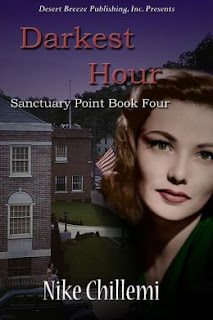 Lucinda Byrne lost her husband and parents at sea. When she discovers the body of her boss, his A-List society finacee, backed up by her powerful family and a corrupt DA, acuses Lucinda of murder. She struggles on, shielding her five-year-old son, her feisty grandfather and arthritic grandmother from the ugliness of her situation. She mistrusts the dapper ME, thinking he's a ladies' man, but soon realizes he may be the only one in her corner.

Hank Jansen, the county ME who's had his share of pain and loss, doesn't know if this little widow was in on the murder, but he knows by the trajectory of the bullet she's too short to have pulled the trigger. His professional opinion ignored, he begins his own investigation and at least one cop accuses him of an ethics violation. He certainly can't deny he's fallen head over heals for the accused, and also is crazy about her son. A huge problem is there's a leak inside the investigation and the murderer is always one step ahead of them.

Nike has graciously answered a few questions for my blog:

Blondie (that's me!): Is there anything that happened in the writing of this novel that surprised you?

Red (that's Nike!): I thought my heroine Lucinda Byrne had two sweet grandparents who would stay in the background and just...well look sweet. However, Nellie and Daniel Walsh took me by surprise. I hadn't planned on Mrs. Walsh having crippling arthritis and on that illness becoming a sub-theme in the novel. So, I had to research how severe arthritis was treated in the 1940s. As his wife's role in the novel grew and blossomed, Mr. Walsh also made himself known as an elderly gentleman of honor and dignity with quite a backbone. Then I began to depict them engaging each other as a married couple. They weren't content to remain in the background. They insisted on coming to life.

Blondie: How did you develop the plot for DARKEST HOUR and how did you come up with the name?

Red: In my Sanctuary Point series, one novel flows out of another. Main characters in one novel will appear as subordinate characters in the next one. Hank Jansen, the Nassau County Medical Examiner, first appeared in my Christmas/New Year's novel in the series, GOODBYE NOEL. Then he popped up at the murder scene in PERILOUS SHADOWS. I got to like him and thought he'd be a terrific hero. He is the most flawed of my heroes, but like all my others, he seeks to right injustice. So, he needed a heroine, but I wanted a gal who would be put off by him at first. So, I created a widow with a young son who is dignified and protective of her family. At first she thinks Hank is a ladies' man and too cavalier for her taste. Then, of course, he grows on her. It helps that he's practically the only one who thinks she's innocent of murder. The name DARKEST HOUR came to mind because things in this story get so scary for the heroine.

Blondie: When we first meet Hank Williams it would never occur to us he'd take any personal risks to help a young woman he hardly knew. How did you create this character?

Red: That's right. Hank wouldn't be seen as a man to go out on a limb for anyone. It's not that he's cowardly. He's got a backbone. It's just that he's been so hurt in the past he doesn't extend himself for other people. He's as surprised as anyone when he decides to help Lucinda Byrne. Perhaps it's because his professional opinion has been ignored, and the one thing he's got left is his career. Then he begins to see her as someone who's being unjustly hurt. He can certainly identify with that.

Be sure to visit again on Wednesday to read an excerpt from DARKEST HOUR. If you haven't read any of Nike's other novels, you can get them at Amazon or Barnes and Noble when you pop over to order DARKEST HOUR!

Author Bio:
Like so many writers, Nike Chillemi started writing at a very young age. She still has the Crayola, fully illustrated book she penned (penciled might be more accurate) as a little girl about her then off-the-chart love of horses. Today, you might call her a crime fictionista. Her passion is crime fiction. She likes her bad guys really bad and her good guys smarter and better.
She is the founding board member of the Grace Awards and is its Chairman, a reader's choice awards for excellence in Christian fiction. She writes book reviews for The Christian Pulse online magazine. She was an Inspy Awards 2010 judge in the Suspense/Thriller/Mystery category and a judge in the 2011 and 2012 Carol Awards in the suspense, mystery, and romantic suspense categories. BURNING HEARTS, the first book in the crime wave that is sweeping the south shore of Long Island in The Sanctuary Point series, finaled in the Grace Awards 2011 in the Romance/Historical Romance category. GOODBYE NOEL, the second book in the series released in December, 2011 won the Grace Award 2011 in the Mystery/Romantic Suspense/Thriller category. PERILOUS SHADOWS, third in the series released July, 2012, and DARKEST HOUR, the fourth in the series released in February, 2013. She is a member of American Christian Fiction Writers (ACFW) and the Edgy Christian Fiction Lovers (Ning). http://nikechillemi.wordpress.com/

Posted by Tammy Doherty at 7:30 AM