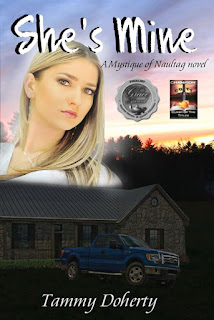 Movies have bloopers. Sometimes they'll leak a scene that was cut. Well, novels have lots of deleted scenes. An author writes the first draft and then tweaks what works, slices what doesn't. But these manuscripts are like our babies - actually "deleting" what we wrote is painful. So the scenes tend to get tucked into a file and often never read again.

Today, I'm offering up a deleted scene from SHE'S MINE. If you've read the book, you will find vague referencing to the Memorial Day parade. In the first drafts, there was actually a chapter with Sean and Caitlin interacting at the parade; Caitlin even rides in one of the fire trucks with Sean in the parade. It just didn't advance the plot enough and I was able to put the little bit of pertinent details in subsequent chapters (where they actually worked better). Still, I liked the scene. Here is a portion of it, for your reading pleasure. Enjoy!

“Janelle has arranged for you to ride in another truck so you can have a front seat view of the parade.”
She looked over his shoulder, realizing why Sean had joined the group. Sitting in the front would be more fun than being squeezed between two rambunctious six-year-old boys. Janelle grinned. Caitlin narrowed her eyes and tried to telepathically communicate I know what you’re doing, to her best friend. Sliding her gaze back to Scott, she nodded.
He opened the door and jumped down. She faced the truck and climbed carefully. The feel of hands suddenly on her hips surprised her. A quick glance showed Sean guiding her. He dropped his hands as her feet hit the ground.
“Sorry, didn’t mean to get touchy-feely there. Just didn’t want you to fall.”
“I have a pretty good sense of balance.” Not wanting a repeat of the other day she added, “Thank you for being considerate.”
He arched an eyebrow. “Thanks for giving me the benefit of doubt. Truck’s over this way.”
Long, quick strides carried him across the parking lot. She stared at his departing form. He moved with confidence. The dark blue pants and white shirt of the fire department uniform looked good on him. Wavy blond curls edged over his collar. Her mouth went dry. Maybe this wasn’t such a good idea.
He stopped beside a red F350 Super Duty. She hurried to catch up. When he turned to look at her, she was struck by the contradictions in his face. Broad with angular planes, his expression could be hard and a bit intimidating. Harbor blue eyes might’ve been chilly. Instead he smiled and his face became round, cheerful, almost boyish.
“This is the forestry truck.” Sean spoke with pride.
“It’s like your truck, only red.”
“And a bit bigger.” He smiled. “This one holds over two hundred gallons of water, plus she’s got a pump that’ll send out five hundred gallons per minute. That is the hose reel.” He pointed as he spoke. “There’s a generator onboard, four 15 amp outlets, two telescoping lights and rear scene lights.”
Caitlin stared at the truck, awed by its implied capabilities. She pointed to the built out front bumper. “Do I even want to know about that?”
“No.” His smiled dimmed, as if recalling unpleasant memories. “That one is a Briggs and Stratton power unit. The others are called Hurst tools. Ask Scott if you want to know more. I’d rather not get into a discussion about car accidents.”
“Okay with me.” She let a smile claim her lips. Sean was pleasant to talk to when she wasn’t being rude. “I’m not much into blood and guts.”
“We’ll get along fine, then.” Pronounced dimples appeared as his grin returned.
Caitlin held her smile, trying to hide her nervousness. In jeans and t-shirt at the farm, Sean had a down-to-earth, regular guy kind of look. Today, in uniform, he looked like a rough-edged gentleman. Both were attractive and that worried her.
Adam always behaved like a perfect gentleman. Dressing smartly, his black hair cut short and combed straight and neat. Yet Adam had played a role, luring her into a trap. And she hadn’t known until it was too late. Then he’d revealed his true self: a manipulating, conniving narcissist. What proof was there that Sean was who he seemed to be?
“Caitlin?”
He’d been talking and she hadn’t heard a word. Now he held the door, gesturing for her to get into the truck.
“Sorry, got lost in thought for a moment.”
“Having second thoughts about riding with me?”
If you haven't read SHE'S MINE yet, grab a copy for your Kindle at http://amzn.to/1MHwhp1 It's only $4.99 - - or FREE with Kindle Unlimited!
Posted by Tammy Doherty at 10:07 AM