I didn't have anyone lined for today, so I thought a book review would fill the spot nicely.


A BEE IN HER BONNET by Jennifer Beckstrand ~ A Review 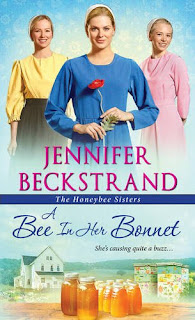 I don't usually read Amish fiction. Just not my cup of tea. But someone asked me to read this book and I was in the mood for a romance.I'm am ever so happy I decided to read it!!

This is the second book in the series but I didn't feel at all lost by not having read the first (I will go back and read that one, though). The Honeybee Sisters are three young women living with their aunt in a Wisconsin Amish community. The girls were orphaned at a young age and their aunt stepped in to raise them. The family is a little unconventional by Amish standards, especially Aendi Bitsy, who lived outside the Amish community for a long time. She's a big part of what made A BEE IN HER BONNET so enjoyable.

In this novel, Poppy Christner is determined to catch the vandal who has been terrorizing their farm. Their beehives have been tipped over, laundry torn from the line, and graffiti painted on the side of the barn. All of that happened in the first book. This one opens with Poppy confronting two people parked in a car on the road in front of the farm - and getting her hand stuck in the driver's side window as they start to drive away. Luke Bontrager comes along just in time to stop the car and force them to roll down the window, freeing Poppy. She doesn't appreciate his interference (she's convinced she was about to see the faces of the vandals). Luke thinks Poppy takes unnecessary risks.

All of Poppy's life, she's believed that she is not marriage material. Her grandfather told her she'd never get a husband if she stayed so stubborn. In school, she confronted bullies and was generally a tomboy. Now along comes Luke, echoing the same sentiment - who would want to marry such a contrary girl. For her part, Poppy concedes (privately, of course) that Luke is handsome but he's much too bossy.

The two are thrown together through various circumstances, each slowly realizing how special and wunderbar the other is. Luke obstinately sticks to his belief that some things are "men's work" and some work is for women. Poppy stubbornly sticks to her feeling that she can do anything any boy can do. Their clashes are humorous and tug at heartstrings as the reason behind each one's emotions is revealed. How will they ever overcome these obstacles to reach the love God surely has planned for them?

Throughout it all, Aendi Bitsy fills the pages with humor and love. She admonishes the girls for giving Luke some cookies as a thank you for saving Poppy in the car incident. "Boys are like stray cats. Feed them once, and they'll keep coming around." Her gruffness doesn't scare Luke, which is good because Bitsy actually has a warm and loving heart and wants only the best for her nieces.

When I finished reading A BEE IN HER BONNET the only thing I wanted to do next was read book 3! This is a fun romance with plenty of humor and loads of warmth. I definitely recommend it!! 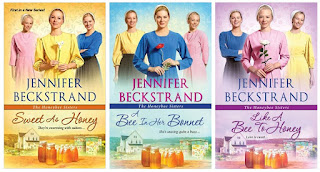 All three of the Honeybee Sisters novels by Jennifer Beckstrand are available on Amazon and Barnes and Noble
Posted by Tammy Doherty at 11:57 AM