This week's Grace Awards Book Tour spotlight shines on A HEART'S HOME by Laura J. Marshall. I'm happy to offer this excerpt for readers to get a taste of this Christian Historical Romance novella set in 1746 India. 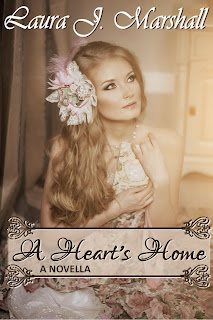 Excerpt from A HEART'S HOME:

Braddock sat for a long time, his head in his hands. Asyra had cleansed his forehead with the cool water. Her image had wavered as he watched her walk away and spread the blanket on the dirt floor. He heard her praying quietly, wishing he was closer to overhear. He joined her with silent prayers, for them to cast off safely from India…for Asyra…for his brother…and his own entangled heart.
He moved from the chair, almost sliding to the floor and stumbled to the bed. His head hit the hay, sharp ends digging into his face. He flipped to his back and fell into a deep sleep.
When he awoke, all was quiet in the small house. He could hear gentle snoring from Mrs. Campbell. The heat was oppressive, it clung to him and pushed him to his feet. As he straightened, he noticed Asyra awake and seated in a chair by a window at the back of the house. She had the burlap tucked up an inch and her nose stuck out the window. He grinned at the childish gesture, coughing quietly to announce his presence.
She turned, smoothing the burlap with her hand and met his gaze.
Braddock motioned to the blanket on the floor.
“Did you rest at all?”
“Yes, I slept just fine. You?”
“If I had awakened in heaven itself, I wouldn’t be surprised. I slept as if I were among the dead.”
She laughed quietly at his description, a small dimple appearing in her left cheek.  She quickly sobered as she saw Mrs. Campbell roll over.
“It looks to be late afternoon. The heat will ease.”
“We’ll be against the wind most of the way home and wishing for this heat come November.” He spoke quietly, not wishing to break the spell of time with her.
“Do you remember England at all?”
“I was but a babe. My father told me some of mother’s estate…the lush gardens and green pastures. He said there were woods so thick you could get lost.”
“It’s true. There’s an enchanting forest with its fill of plants, trees, and fauna. There’s one spot in particular, just a small path to the south of the estate that leads to a God-made haven, where honeysuckle climbs the trees and carpets the forest.”
Asyra seemed to roll this over in her mind. “It sounds beautiful….a-and what is fauna?”
“Animals native to our region….the migrant cuckoo, the roe deer.”
“I-I’m very interested in your herbs and flowers.”
“I’ll see you have books to study.” As she broke his gaze, he recalled what she had said about reading. Her eyes clouded with worry.
“Asyra.”
“Yes?”
“I have your mother’s bible, in the bag. We’ll teach you to read before we reach England.”
“That’s a high order.”
“We can do it…together.” The word slid over his tongue and his heart responded. It expanded and seemed to hesitate in its beating. Together. He and Asyra. His eyes fell to her white teeth worrying her lip. Her soft pink lips parted. She caught his gaze and fell still.
“Th-thank you for bringing the bible.” She stood and walked to the door, taking the bucket with the white willow over to the basin and placing it on the ground. “And the willow.” She bent her head and he saw a tear fall as she took a small cup, dipped it into the pitcher, and wet its roots.
Braddock felt like the air was being squeezed from his lungs. He crossed the room and stood behind her. She barely stood as tall as his shoulder. He looked down as an ankle skimmed into view, the bells quietly jingling. It was funny how the sound had become so commonplace now, part of his days and his memories.
He touched her arm and she turned, falling forward and against his chest. He could feel her silent sobs being wrenched from her very soul. She gulped a deep breath and put her face back against him so he couldn’t see her.
“I’m here. I won’t leave you.”
“Y-y-you can’t promise me that.” 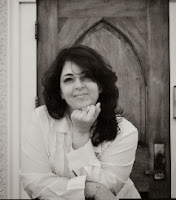 About the author: Laura J. Marshall is a full-time mom of five boys. When not on active duty, she is the best-selling author of The Battle Cry Devotional series and inspirational fiction (historical romantic suspense and contemporary romance). She operates a popular blog called The Old Stone Wall which hosts and promotes Christian and clean books and encourages interaction between authors and readers. See more at www.LauraJMarshall.com

Posted by Tammy Doherty at 7:00 AM