Today I'm offering an excerpt from my third novel, CELTIC KNOT. After reading it, be sure to leave a comment. Next Friday, I'll randomly choose one person from all the comments to win a FREE copy of 'Celtic Knot' - either print or eBook. 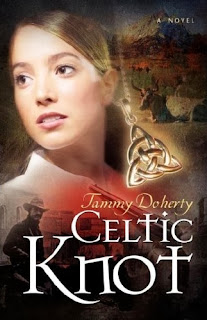 Before Abby could respond to her daughter’s obvious infatuation with this stranger, the front door banged open and heavy footsteps rapidly crossed the store. A small grimace crossed Abby’s face before she could stop it. With a pang of shame she saw that the stranger noticed her sour expression. He turned away without comment.

“Boone!” Millie squealed and threw herself at him.

Boone caught up Millie, twirling her about in the open space in front of the counter. He set her down carefully before turning his attention to Abby.

“Abby, I been looking for you this morning. Thought maybe you would like to join me for breakfast.”

“Good morning, Boone.” Abby forced herself to be cordial. It wasn’t as if she didn’t care for Boone, just not the way he wanted her to. “I’m afraid Millie and I already had our morning meal.”

For a split second, Abby felt grateful to God. The feeling passed quickly. “Oh, but we did eat our fill and then some. We shared breakfast with the Stantons.”

This time Boone frowned. “The preacher’s family? What you doing over there?”

“Jennifer and Millie are friends, if you must know.” What she really wanted to say was that it was none of his business.

Out of the corner of her eye, Abby saw the stranger make his purchase and move to leave the store. He politely pretended not to hear the conversation even though he was less than three feet away. At the same time, Boone became aware of the man’s presence.

“Could say that,” Kyle answered vaguely.

“Look, mister,” Boone stood toe to toe with Kyle, their eyes level with one another. “I’m the law in these here parts an’ it’s my job to know about newcomers to town. An’ I ain’t partial to your wiseacre answers.”

“Well, I guess that makes us even, ‘cause I’m not partial to your lewd, nosy attitude.” Kyle held Boone’s gaze, as if daring the other man to make something of his answer.

Boone stared back, unblinking. He wouldn't back down from a stare-off. Most cowpunchers either worked for Raymond Bigelow or were just passing through Prophecy. Bigelow hands generally knew their place when it came to Boone Warren. Rambling men were naturally intimidated by Boone’s large size and the way he carried himself. This man was quite obviously not intimidated or impressed.

Tension thickened the air as each man waited for the other to back down. Abby noticed that while Boone’s gun rested in its customary place at his hip, the stranger was unarmed. If Lachapelle noted this fact he made no sign that it mattered. And though she well knew how apt Boone was with his fists, she began to wonder if perhaps this newcomer might be able to best him in a fight. She wasn’t willing to find out the answers to any of these questions.

“That’s enough,” she scolded sharply. “I’ll not have such a show of childish violence in front of my daughter.”

Even the sharpness in her voice did not break the staring match. Abby frowned and forced herself between the two men, shoving Boone backwards. He broke eye contact with Lachapelle and turned his gaze to her.

“I’m ashamed of you, Boone Warren.” Her voice was quiet, yet forceful. “You really must learn your manners.” 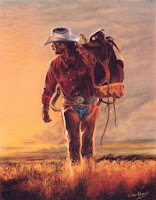 Be sure to leave a comment with your email or contact information. And if you'd like to see what I envision the characters and locations look like in CELTIC KNOT, check out my Pinterest board for the novel: http://www.pinterest.com/tdinishowen/celtic-knot/ I'd love to connect with you on my Facebook author page, too!

Don't want to wait to start reading CELTIC KNOT? Download it now for $3.99 at Amazon, Barnes and Noble, or for other eReaders check out Smashwords.
Posted by Tammy Doherty at 6:30 AM